Smart Meters could be overbilling you by a whopping 582%

Smart Meters could be overbilling you by a whopping 582% 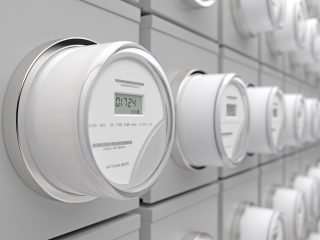 As reported by web site Boing Boing, a research team from the University of Twente in Enschende, Netherlands, and Amsterdam University of Applied Sciences documented billing inaccuracies in a paper that reviewed the efficacy of so-called “smart” electric meters, ranging from -32 percent to +582 percent of the actual power consumed in a month’s period.

The paper also noted that, ironically, the overbilling is mostly due to older power-saving features because they introduce line noise that interferes with the wireless signal and thereby ‘confuses’ the meters. (RELATED: Read SILENT KILLER: Smart Meters Are Destroying Your Health.)

“Static, or electronic, energy meters are replacing the conventional electromechanical meters. Consumers are sometimes complaining about higher energy readings and billing after the change to a static meter, but there is not a clear common or root cause at present,” an abstract of the findings states. “Electromagnetic interference has been observed between active infeed converters as used in photo-voltaic systems and static meters. Reducing the interference levels eliminated inaccurate reading in static meters.”

In all, five of nine smart meters that were tested provided readings that were substantially greater than the real amount of energy utilized, while two actually gave readings lower than the amount of power consumed.

Researchers found the biggest discrepancies when they joined dimmer switches with LED and energy-saving light bulbs.

Upon finishing their experiments, researchers then took apart the tested smart meters to see if they could find out what was causing the massive deviations. In the process, the three-man team of researchers found that the meters which provided the dramatically higher usage rates used a Rogowski Coil in the construction, while meters that gave artificially lower readings employed Hall effect-based sensors. But both modes of construction inaccurately measured the actual amount used.

It wasn’t clear from the abstract whether the tested meters were actually in use, either in the Netherlands or elsewhere. If both of those types of meters are being used, then some are paying less for the electricity they use, while most are paying much, much more.

In addition to costing consumers far more money, some researchers contend that the meters themselves are also health hazards. And some lawmakers at the state level are taking action.

State Sen. Patrick Colbeck of Michigan testified before the state House Energy and Technology Committee in early March regarding a piece of legislation – HB 4220 – that would permit homeowners to opt out of getting smart meters installed on their dwellings without having to pay a fine. He has based his opposition to smart meters on research indicating that they can cause a wide array of health problems, in addition to a cyber security threat posed by their installation and use, since they are wireless and transmit data to the utility company. (RELATED: Smart meters use unsafe, cancer-causing technology.)

During his testimony, Colbeck said he thinks smart meters are “putting our homes, our nation and, frankly, some of the power suppliers at risk.”

Others have issues with the privacy aspect of smart meters. Electric use data hacked from a wireless smart meter can be used by clever criminals to determine when people are home and when they are gone – to work, in particular – which provides them a window to enter the home without expecting anyone to be there.

There are also physical dangers to smart meter use. As Natural News has reported, some smart meters that are mandated by government have spontaneously caught fire, putting residents at risk of loss of life and property. Learn more at SmartMeters.news.

J.D. Heyes is a senior writer for NaturalNews.com and NewsTarget.com, as well as editor of The National Sentinel.

Back in 2015, Pacific Utility Audit wrote an article on electric smart meters – if anything the problem has gotten worse, not better! (We didn’t know about the fire hazard then)   Here is a link to that article:  https://pacificutilityaudit.com/news/smart-meters-are-they-really-that-smart-for-you/
Since we have a database of thousand of west coast property profiles that we have audited since 1989, we can determine if your property’s electric consumption is reasonable.  If it is not, we can initiate an investigation or replacement of your smart meters and obtain retroactive refunds for you if you have been overcharged!